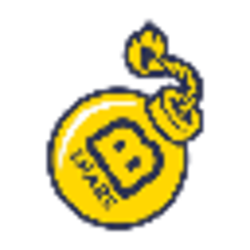 Bomb Money BShare current market price is $56.44 with a 24 hour trading volume of $342.92K. The total available supply of Bomb Money BShare is 0 BSHARE with a maximum supply of 70,001 BSHARE. It has secured Rank (Not Available) in the cryptocurrency market with a marketcap of $0. The BSHARE price is 10.43% up in the last 24 hours.

Bomb Shares or $BSHARE is the way we represent the value and shareholders trust of the Bomb Protocol and its ability to maintain peg to Bitcoin. During an expansion epoch the Boardroom mints $BOMB which is distributed proportionally to $BSHARE holders who are staked in the Boardroom.$BOMB is an algocoin which is designed to follow the price of BTC. Enjoy high yields normally only found on high risk assets, but with exposure to BTC instead!The $BOMB algorithmic token serves as the backbone of a rapidly growing ecosystem aimed towards bringing liquidity and new use cases to the BSC network.The protocol's underlying mechanism dynamically adjusts $BOMB's supply, pushing its price up or down relative to the price of $BTC.Inspired by tomb.finance, which was originally inspired by the idea behind Basis as well as its predecessors (bDollar and soup), bomb.money is a multi-token protocol which consists of the following three tokens:-bomb.money ($BOMB).-BOMB Shares ($BSHARE).-BOMB Bonds ($BBOND).What differentiates $BOMB from other algorithmic tokens?Unlike previous algorithmic tokens, $BOMB is not pegged to a stable coin — it is instead pegged to $BTC.Because of BTCs high per coin price, we have decided to peg BOMB to BTC at a 10,000:1 ratio. In other words, 10,000 BOMB should equal 1 BTC for our PEG to be maintained.One of the primary shortcomings of past algorithmic tokens has been a lack of use cases, leaving no good reason for somebody to want to use or hold them. In order to successfully maintain the peg in the long-run, the BOMB team will maintain a focus on innovation around enhanced functionality and use cases.